Everything You Need to Know about UTIs

Did you know that urinary tract infections – a.k.a. UTIs — account for 8.1 million doctors visits a year in the US? And that 40%-50% of women will experience at least one UTI in their lifetime?

These are huge numbers and make UTIs second only to pneumonia among the most common reasons for a doctor visit. But even though UTIs are so common, many people are still in the dark about bladder infections and why they happen. Well, we’re here to help! Here’s what you need to know about UTIs.

What is a UTI?

Nearly half of women experience a UTI at some point in their lives with varying degrees of severity, but what exactly is it?  According to the Mayo Clinic, a UTI is a “infection in any part of your urinary system — your kidneys, ureters, bladder and urethra, where most infections involve the lower urinary tract — the bladder and the urethra.” There are a few different kinds of UTIs, but they most commonly affect the bladder (cystitis) and the urethra (urethritis.)

Cystitis is generally (about 80-90% of the time) caused by E. Coli, a bacteria you may have heard about as a cause of food poisoning, and is generally found in the gastrointestinal tract. But when this bug finds its way into the bladder, it causes infections with symptoms like pain in the bladder area, an uncomfortably strong urge to urinate even when not much liquid is in the bladder, and frequent and/or painful urination. Sometimes there is even blood in your urine, and occasionally fever. Other bacteria can cause UTIs as well, but E. coli is public enemy #1.

Urethritis means the infection is only in the urethra. Different bugs tend to cause these localized infections, including sexually transmitted bugs like gonorrhea, herpes and chlamydia.

Women are more likely to get UTIs (lucky us??) and while most are more annoying than harmful if the infection stays limited to your bladder, if the UTI spreads to your kidneys (pyelonephritis), they can get a lot more serious, causing symptoms like back pain and fever. 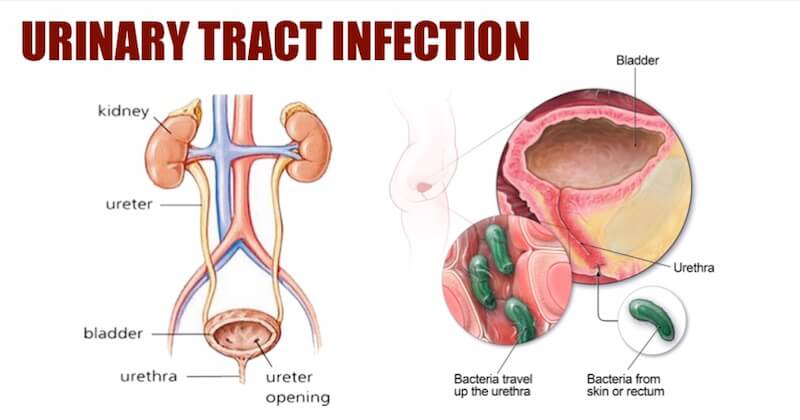 Your bladder & kidneys, up close and personal.

How Do UTIs Happen Anyway?

UTIs usually occur when bacteria enter the urinary tract through the urethra and begin to reproduce in the bladder. While our urinary systems are designed to keep out these microscopic jerks, our defenses sometimes fail. When that happens, bacteria may take hold and grow into a full-blown infection in the urinary tract. Typical jerk move, am I right?

While urethritis can indeed be caused by sexual intercourse, you don’t have to be sexually active to get one. Why is this? Well, the nature of our anatomy as women puts us more at risk simply because of the very short distance between the anus and the urethral opening. This short anatomical gap gives us a greater chance of the bacteria reaching the urinary tract through normal activities like wiping and sex. And to add insult to injury, our urethras are also shorter than those of men, so the bugs have a shorter distance to travel to get to our bladders. (Because I guess the pain of childbirth and monthly periods wasn’t enough of a reward for having lady parts?)

Besides sexual activity and having female anatomy, using a diaphragm, spermicide, or going through menopause can increase your likelihood of getting a UTI.

While there’s no sure-fire way to completely avoid getting a urinary tract infection, there are things you can do that can minimize the chances a bit:

Some over the counter products can help relieve the symptoms, but antibiotics are needed to completely vanquish those microscopic bladder beasts. So if your symptoms last longer than 1 or 2 days, seek the attention of a doctor, especially if you are pregnant, find blood in the urine, or are experiencing fever, nausea or vomiting.

Will Finess Cause UTIs?

No! In fact, studies conducted on both the original and current designs of Finess found no difference in the rate of UTI’s before, during, and after the study period.

So there it is – the 411 on UTIs. (Side note: is that still a valid term if half the current millennial population have no idea what 411 is and have definitely never used it?). We hope you’re feeling more informed about this common, though often misunderstood, occurrence. Now go drink some cranberry juice! (It still counts if there is a little vodka in it.)

Menu
Your coupon code is valid for